Despite the uncertainty around a last-minute Brexit deal and the ongoing disruption issues caused by Covid19 the Service has continued to deliver as a source of advice and facilitation between potential joint venture participants. Enquiries are still coming forward though yet again I have to report that the number of those seeking opportunities far outnumber the opportunities available.

I am sure that not being able to get out around the major agricultural events over the last year to speak to people about what the Service does has been a factor in that. That is why I was really pleased to have the opportunity to speak, via Zoom, to the South of Scotland Border Valuers’ Association and just last week to the Keith and District Discussion Group. I want to thank them both for their invitation and their initiative in keeping their meetings going. If there are any other groups who would like to hear more about the Service, then please don’t hesitate to get in touch.

In Scottish Governments current Programme for Government there is a commitment as follows: –

“We will extend the work of the SLMS to encourage uptake of vacant and/or underutilised crofts by new entrants”.

I believe this is an area of huge potential and I have held early discussions with the Crofting Commission on how this can be delivered.

I have really enjoyed the first 18 months and despite Covid, I am delighted to have been involved in getting a number of joint ventures in place. I would like to publicise them more but fully respect that many people like to keep these new developments private. However just talking about the Service is making people start to think and it is very pleasing to see a number of longer term lets to New and Young entrants on the Crown Estate but also some Private Estates.

In my last blog in December, I said that I was going to have to take some time out to deal with a health issue. I am delighted to report that Cabinet Secretary Fergus Ewing has endorsed Allan Young coming on board to keep the Service running whilst I am off.

Allan was brought up on a livestock farm near to Castle Douglas and following graduation from Newcastle University he returned home to farm for twelve years. 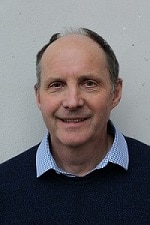 In 1992 Allan joined the Department of Agriculture, working initially in the Inverness Area office followed by spells in Edinburgh and laterally, before he retired, as Officer in Charge of the Hamilton office.

Allan has always welcomed the opportunity to engage directly with farmers and a wide range of stakeholders to support Scottish agriculture and the rural economy. He will bring a lot of practical knowledge and career experience to best support those who wish to make use of the Scottish Land Matching Service.

We are having a hand over period at the moment and have put in place arrangements such that the contact details for Scottish Land Matching Service will remain the same – it will just be a different voice on the end of the phone!